Mirri Bara is a rocky outpost which clings to the hillside west of Kadugli. It has a population of 800 people and has been ravaged by decades of relentless conflict. Conditions in the village are archaic. 92% of houses are made from mud bricks and roofed with a mixture of wood and grass. The majority of residents depend on bicycles as their main method of transportation. There is no electricity; gasoline lamps light every home and, for the few people who own cell phones, an important link to the outside world, it is necessary to send them to Kadugli to be charged. 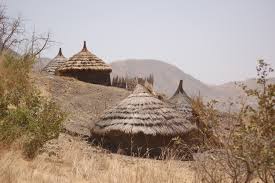 These conditions are undoubtedly difficult but there is also much opportunity for potential and growth. In Mirri Bara, as in many other rural, less developed villages, the women carry out the majority of agricultural work yet their role is often not recognized or appreciated. Ru’ya decided to harness the agricultural experience many of the village’s women had already acquired through experience and improve it through education.

The resulting project was innovative and pioneering, yet ground-breakingly simple; four illiterate women, in their 40s and 50s, were sent to the Barefoot College in India to train in solar technology, with a view to returning and teaching their skills to others, who would then also pass on their knowledge. Thus the knowledge would spread and enlighten many villages in the region. The plan was not without opposition however; the men of the village held a meeting, expressing a certain degree of outrage and concerns such as ‘Who will take care of the house and children while they are away?’ It was a real challenge for Ru’yas Executive Director, Zeinab Blandia and the women of Mirri Bara to overcome the men’s objections but they persevered and relentlessly pursued their objective until eventually the village Elders agreed and the women embarked on a six month training period.
The Barefoot College is a non-governmental organization which aims to provide basic services and solutions to problems in rural communities, with the objective of making them self sufficient and sustainable. Based in Rajasthan, it is an amazing initiative which trains exclusively illiterate or semi literate rural women in simple but effective technologies that can better their lives and the lives of their communities (www.barefootcollege.org) Here the women, Khadiga Omen, Asha Rhma, Um Hagain and Mona Morsal embarked on an astonishing journey. Though illiterate, through observation and practical work they acquired knowledge, skills and experience in solar technology. The teaching was tailored specifically to their needs and was aimed at using solar energy to supply rural electrification.

When the women returned to Mirri Bara they installed solar electricity in an astounding ninety nine homes; the previously dark village was enlightened, not just superficially but by the knowledge and expertise these women had provided for their community. The men’s suspicions had been overcome and the chance they took in agreeing to the scheme was rewarded. As a consequence, gender relations in the village were substantially reformed. Women were afforded a new respect and the potential of their abilities recognized.

The framework and objective of this training was derived from Ru’yas core policy of utilizing grassroots methods to effect positive change and promote gender equality and justice. We believe a strong network of women and women’s organizations is important in order to improve gender relations; the men of Mirri Bara would never have agreed to the scheme if all the villages women had not represented such a united front and tirelessly argued their case. This unity and solidarity stemmed from the previous establishment of a Women’s Solidarity Funds Group. This simple initiative consists of a group of women meeting weekly, to establish a support network and strengthen their position in society by demonstrating the power the hold when they make group decisions and resolutely support each other. The campaign to send these four women to India to train was a perfect example of this strength in a group decision. Ru’ya may have provided the framework and funds, but ultimately it was the determination and resilience of the women themselves that led to their success.
Posted by ruyablog at 00:50